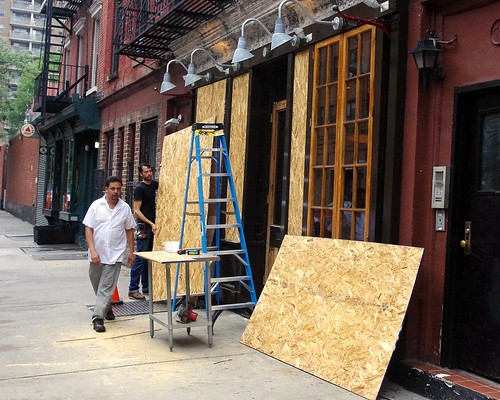 Like much of the rest of the country, I was glued to the television and the internet all through the weekend, watching to see just how Irene left her mark on the East Coast. One city that was busy battening down the hatches was New York City, of course – a city not generally familiar with hurricanes. Block after block lined with restaurants of every size, shape, and cuisine, much of my Twitter feed seemed to be focused on how the thousands of food service businesses within the metropolis would prepare – and fare.

According to Crain’s New York, it was seemingly a case-by-case basis. As some chefs like Tom Colicchio opted to close their doors and others like Todd English chose to keep theirs open, everyone from neighborhood bistros to hotels and caterers ultimately each did what they felt was best, with the shutdown of mass transit being the greatest concern.

“For the safety of our employees and guests, we felt it was more prudent to close on Saturday and Sunday. We’d hate to be in a situation where someone was stranded,” said Paul Bolles-Beaven, a managing partner of Danny Meyer’s Union Square Hospitality Group. The company closed about 10 of its restaurants and its catering facility over the weekend.

On Saturday, Astor Wine and Spirits operated with a skeleton staff of six, down from its normal 18 employees. “We stayed open until 5:00 p.m. and were pouring Proseco for our customers as they waited in long lines,” said general manager, David Phillips. “It was a very busy day.”

Sunday brought on a mixed reaction, with many opening their doors once the storm had passed, with folks like Immaculate Infatuation helping to coordinate information on city restaurants back in service. By Monday, many were still making their way through the storm’s aftermath.

Rickshaw Dumpling Bar’s two restaurants in Manhattan were closed Monday, but it parked two of its food trucks outside the eateries to serve customers. Owner Kenny Lao said, “We made the decision to have our trucks service our store locations because we weren’t sure if all of our staff would make it in today on public transportation.”

Best of luck to everyone affected by Irene. Hope it’s back to business in no time.